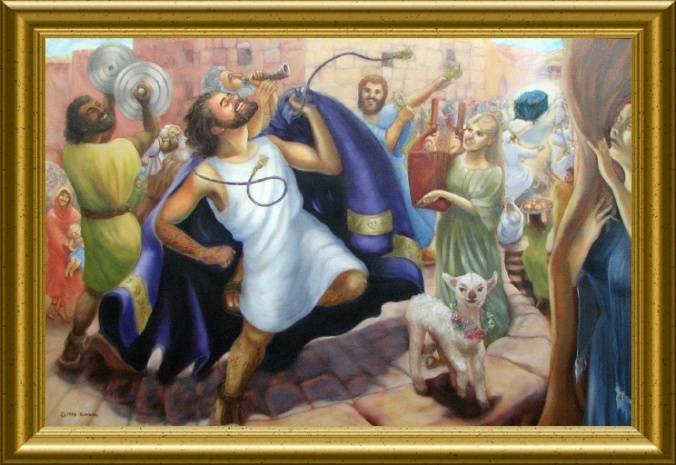 Not since his youth had his body felt so light, so free.  Around him the tumult of the procession rose as the maidens, tambourines in hand, rejoiced in the dance.  Young men and old shouted loudly and clapped hands, overcome by the excitement of the occasion.  Tearful voices rose in praise and prayer amid the trumpet blasts.  The Ark of God’s Presence was finally being carried into Jerusalem.  After so many years of absence, God was dwelling once again among His people Israel. This was a day like no other in Israel’s history.

And there, at the head of the procession, dressed as a priest, was King David:  leaping, whirling and bowing in utter abandonment before His God.    As wondering Hebrew eyes looked on at the unprecedented scene of their king dancing in the streets of Jerusalem, David was oblivious.  Let others worry about whether his subjects would scoff or admire, ridicule or praise him.  Today he would celebrate before his God without shame or care.

There were other eyes watching David’s wild exuberant dance that day.  Michal, his wife, looked on from a window overlooking the procession.  Later she would verbally castigate David, accusing him of “uncovering himself in the eyes of the maids of his servants”. David had not stripped down to his underwear, as her accusation infers.  Rather he had exchanged his kingly robes for the ephod which only the priests wore.  Michal’s complaint was that he had debased himself (and her) by removing his kingly robes, symbols of his authority.

After seeing the Ark safely to the tabernacle he had erected to house it, David had distributed gifts of bread, meat and raisins to each Israeli household, finally returning to also ‘bless his (own) household”.  Michal, however, would have none of it.  To her, David’s actions had been unacceptable and she couldn’t wait to tell him.  Her bitterness negated the blessing on her house.

David’s response left her in no doubt about his priorities.  “I will be even more undignified than this, and will be humble in my own sight.”  The narrative ends with the sober statement: “Therefore Michal, the daughter of Saul, had no children to the day of her death.”

It’s easy to pass over this event in Israel’s history, described in 2 Samuel 6.  It’s easy also to dismiss it as a possible moment of eccentric madness in David’s life which he may have later regretted.  Alternatively we may want to take a ‘selah’ pause to consider the deeper truth Holy Spirit wants to show us here.

David represents for us the Bride of Christ, while Michal symbolises the false bride of Christ, or that carnal religious system that masquerades under the name of Christ’s Bride but does not actually know Him or unconditionally love Him.

It is interesting that twice in this chapter Michal, wife of David, is identified as ‘daughter of Saul’.  Even David addresses her as such when he states “It was before the Lord who chose me instead of your father and all his house …….”  (v.21).  Saul’s kingship had been one of carnality and independence from God, and David had been chosen by God to take Saul’s place.  Saul’s kingship had been after the flesh, while David’s was after the Spirit.  In her heart Michal had never left her father’s house. Consequently she accused David of carnality, an accusation frequently levelled by those walking in religious flesh against those who seek to walk and live by God’s Spirit.  Often the most effective way to divert attention from the carnality held in the religious heart is to accuse others of the same sin.

Spirit and flesh cannot mix for long.  They are at war with one another (Gal. 5:17).   Never again was there any intimacy between Michal and David and Michal died childless. The difference between the true Bride of Christ and the false Bride is one of fruit.  The false Bride cannot bring forth spiritual fruit.  A life without true worship results in spiritual bareness.

Where had David obtained such freedom?  He had first begun to obtain it as a young, unknown shepherd boy wandering Israel’s hills alone with his father’s sheep.  In his loneliness and isolation David had sought comfort and fellowship with the God of Israel. God had met him and the relationship grew.  Later in his life, desperately hiding out in wilderness caves pursued by a murderous King Saul, David built on that ‘first love’ relationship with his God, even as he feared for his life.

At the height of suffering and persecution he wrote:” My heart is steadfast, O God, my heart is steadfast;  I will sing and give praise, Awake, my glory!  Awake, lute and harp!  I will awaken the dawn.  I will praise You O Lord, among the peoples, I will sing to You among the nations, For Your mercy reaches unto the heavens, and your truth unto the clouds.” (Ps. 57:7-8)

David’s relationship with God had been forged in isolation, deepened in desperation, and established in consecration.  Because he knew God in the secret place of intimate communion, David was free to worship God in the presence of all Israel out of the overflow of the relationship he already enjoyed with Him.

David’s worshipful dance was no slow dignified rhythmic movement. It was not choreographed by man.  It was an expression of pure joy that was both compelled and directed by the Holy Spirit.   The Old Testament Hebrew tells us David whirled and leapt.  Who else is described in scripture as leaping?  It is Christ Himself as He leaps upon the mountains calling to His Bride (Song of Solomon 2:8). David danced with God that day.

Dancing with God is costly.  In fact it may cost you everything.  It will impact relationships, and embarrass your loved ones.  It will get you talked about behind your back.  It will mean being misunderstood with no way of justifying yourself.  It will isolate you and separate you from those who believe dancing with God is offensive and undesirable.  And you will be “humbled in your own sight” in the process, as David was.  Dancing with God will mean laying down your need to be understood, loved and admired by others, possibly even those closest to you, in order that the Lord may be exalted.  True worship is sacrificial.

Extravagant worship is the natural overflow of passionate and intimate relationship in the secret place.

And when the Bride worships, truly worships, the Bridegroom cannot help but come leaping upon the mountains to behold her.

8 thoughts on “Dancing With God”