The Lady at Number 31 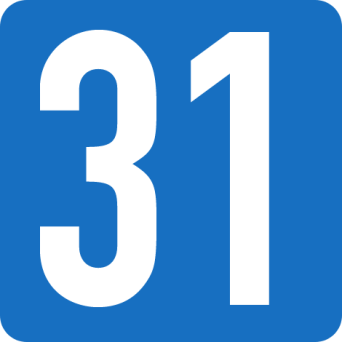 When did I first notice her? I don’t really recall. I’m sure there was an initial meeting, but thinking back she seemed to be always hanging around in the background even before I became aware of her. As time went on she would suddenly turn up, intrusively, when I was least expecting her….. during coffee with friends, or while quietly enjoying my favourite magazine. Once she arrived with my pastor’s wife, who seemed to know her very well. And of course I saw her regularly at church. But I have to confess, the more I saw of her the less I liked her.

My friends, of course, all aspired to be just like her and spoke of her with glowing admiration. The men I knew viewed her almost like a pin up girl, though none would ever admit to it. In fact, everybody loved her except me. It was taken for granted I felt the same way and I sensed any dissension would have been met with universal disapproval, so I kept my feelings about her to myself. But the harder I ignored her the more annoying she seemed to become. I knew no matter how hard I tried I could never emulate her. Her beauty was legendary, her behaviour immaculate, and her talents unmatched by anyone I knew. In short, she was all I was not.

Soon I found myself becoming depressed over her. She seemed to be watching me no matter where I went. It was as if she was looking over my shoulder in silent disapproval at my every move. No matter what I did there she was, showing me up by just being herself. She had this uncanny knack of making me feel guilty without uttering a word.

Finally I decided enough was enough. The time had come for confrontation, a face-off that would settle it between us for all time. Certainly it would be risky, but what else could I do? Either she would win and I must sullenly join her army of admirers forevermore holding my peace, or, (as I secretly hoped!) I would unmask her for what she really was, marching triumphantly away feeling forever justified that there was something wrong with her all along!

And so it was, armed with all the courage I could muster and a set of gritted teeth, I turned up that day at No. 31 determined to have it out with this ‘celebrity’ housewife once and for all. Standing at her door I banged loudly until she opened and finally we were face to face. Now she would be given a piece of my mind!

“What is it with you?” I demanded. “You’re up every night cooking and sewing for your family, then getting up at sunrise to run your real estate business, buying and selling land no less! You run around planting vineyards, and, um, oh yeah, they say you’re always down at the charity centre working with the poor. Not only that, you make all your own clothes and you look stunningly beautiful …..ALL THE TIME! Your husband has nothing but admiration for you and even your children think you’re perfect. Everybody talks about how kind and wise you are, and, and… well, here we just ordinary, less than beautiful, imperfect, unwise women are constantly being told to become just like you. Well, I for one am tired of it. Who can live up to your reputation? Do you know how hard you make it for us? Well, do you? Huh? Do you?”

Not a word did she answer me. I stood for a moment catching my breath before I launched into my next tirade. Still she did not speak. Perhaps I’d forgotten to mention something on her long list of accomplishments and she was waiting for me to remember?

Then it was, as I stared defiantly into her eyes, and she gazed back into mine, that I saw her, really saw her, for the first time. Hidden there, behind her serene and gentle smile, like a silent secret hanging in the air, I saw what I had missed for so long. This virtuous wife whose image had so often been paraded as my highest example in life was not who they said she was! I gasped with joy and relief as revelation of her true identity flooded my soul. Relief replaced anger, understanding replaced guilt, and hope came alive.

Here she was, the Bride of Christ, hidden in the last chapter of the book of Proverbs. There for all to see, yet so seldom discerned. And having at last discovered her I knew I had also been granted a precious and rare gift…..freedom! Never again would I avoid her company, never again would I compare my shortcomings with her accomplishments.

The secret of the lady at No. 31 was mine at last! She was not, after all, the lofty unattainable example of Christian womanhood I and so many others had been instructed unceasingly to strive towards. Instead she had been here patiently waiting as a revelation of Christ’s Bride, hidden since ancient times, yet ready to be revealed to all who would seek her out. She was and is what each of us, man, woman and child, all who truly love and pursue the Bridegroom, are becoming together. And her worth is indeed “far above rubies”.

“Strength and honour are her clothing, she shall rejoice in time to come. She opens her mouth with wisdom and on her tongue is the law of kindness. She watches over the ways of her household, and does not eat the bread of idleness. Her children rise up and call her blessed; her Husband also, and he praises her: “Many daughters have done well, but you excel them all”. Charm is deceitful and beauty is passing but a woman who fears the Lord, she shall be praised. Give her of the fruit of her hands, and let her own works praise her in the gates.” Proverbs 31:25-31