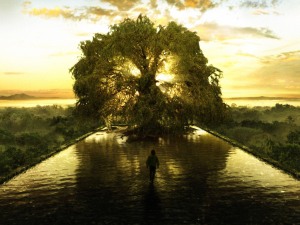 Like an apple tree among the trees of the woods, so is my beloved among the sons. I sat down in his shade with great delight, and his fruit was sweet to my taste.

Come with me to a garden, a magnificent garden where it seems every plant, tree and creature radiates intense life.  In the middle of this vast garden a woman leans to pluck the fruit of a splendid looking tree that towers over all the other plants. Tentatively, she tastes the fruit, and seeing her obvious delight the man with her also tastes.  Their enchantment with the tree is short lived, however.  Soon the woman discovers she has been deceived and the man realizes he has crossed a deadly line that is irreversible.  Now they perceive everything in the garden, and each other, in a different way.  No longer do they think and act in unison, their differences begin to define them.  No longer do they live to please the other, instead their focus shifts to their own individual desires.  The tree that seemed to them so resplendent with promise has become their death sentence, and the death sentence of all their future offspring.   From now on the man will struggle against the earth for his own survival, blaming the woman for his predicament, subjecting her to his control by means of his physical strength.  The woman will learn to distrust the man and will devise her own means of surviving alongside him.

Now come again to the same magnificent garden.  See another woman leaning towards a most majestic Tree.  She tastes and finds the taste good indeed.  So good, in fact, she hungers for more.  As she eats of the Tree she finds herself increasingly entwined in its fruitful branches.  So delightful to her is the fruit of this Tree she soon discovers she has lost all desire for any other food or nourishment.   The Tree in turn embraces her, drawing her further, deeper into its glorious interior.  Its captivating fragrance is all around her, its fruit nurtures and sustains her, and its boughs shelter her.  The Tree has become everything to her.  The Tree has become her Life.

Most of us are familiar with the first scene. It describes the first man Adam, the first woman, and their spectacular fall from grace.  I shall not refer to the woman as Eve, for the first name given to her was Ishshah, or ‘woman’ (Gen. 2:23).  Her name did not become “Eve, mother of all living”, until after the fall.  The tree from which woman and Adam ate was the Tree of the Knowledge of Good and Evil, which ultimately leads to death.

The second scene centers on the Tree of Life, which is Jesus Christ.  And the woman?  The woman is His Bride, of whom Ishshah was a mere shadow and type.  The New Testament teaches that Christ is the last Adam, and that the first man, Adam, was a type, or shadow, of the second Man, Jesus Christ (1 Cor. 15:45-47).   Seldom do we consider that the first Adam had a bride, and that she too was a type or shadow of the multi-membered ‘woman’ who would become the last Adam’s immaculate bride.  This spiritual Bride is a glorious mystery hidden within the Word of God from Genesis to Revelation.

So abundant with everlasting life was the Tree of Life that God installed cherubim and a flaming sword to prevent Adam and his bride from partaking of it in their fallen state (Gen. 3:24)).  The tree from which the first Adam and his bride ate looked, smelled and at first tasted like life to them, but in reality was death.  For Adam and his wife to eat from the Tree of Life after their fall into sin would have meant their bodies would never have died.  There would have been a race of human beings on the earth who would sink further and further into the depths of sin, increasing in numbers, but living in immortal bodies that never succumbed to natural death as we now know it.  Every kind of evil imaginable and unimaginable would plague this immortal race.  The consequences are too horrible to contemplate.  God, in His infinite mercy, removed mankind from the presence of the Tree of Life.

At a time of His own choosing in the course of human history God again presented the Tree of Life to humanity.  In the garden the Tree had represented Christ.  On earth, Christ came to offer Himself once again to mankind as the Tree of Life.  Man had chosen death over life.  Christ was sent by the Father to again offer humanity a choice.  A tree was raised up on the sin ravaged soil of the earth, in its very midst.  On that tree was nailed a Man, the last Adam, who Himself was Life incarnate.  In His willingness to provide the spiritual nourishment for which humanity craved, His flesh was torn and His blood spilled into the earth.  The Tree of Life rejected by humankind long ago in a magnificent garden became manifest once more in the midst of the fallen race of man.

“Unless you eat the flesh of the Son of Man and drink His blood you have no Life in you” he had said.  “Whoever eats My flesh and drinks My blood has eternal life, and I will raise him up at the last day.  For My flesh is food indeed, and My blood is drink indeed.  He who eats My flesh and drinks My blood abides in Me, and I in him.”  Such graphic language offended most who heard, and still does.  What do you do with a statement like that?  You either write it off as the ramblings of a mad man or humbly admit there is something here you do not yet understand and follow.

The Tree of Life still stands in the midst of the earth offering to share its fruit of endless, abundant God-breathed Life to humanity. Its access is no longer blocked by cherubim or a flaming sword.  All who wish to eat may taste freely and live.

And within its towering branches a mysterious woman abides, never to leave its shelter, never to crave for any nourishment except that which it provides for her, never to shift her eyes away from its incomparable beauty.  She is coming home.

Copyright Notice: Permission is granted to freely reproduce any Bread for the Bride articles in emails or internet forums, unedited, and providing this copyright notice is included.     To permanently display an article on any static website please contact me for permission.

7 thoughts on “Feasting on the Tree of Life”