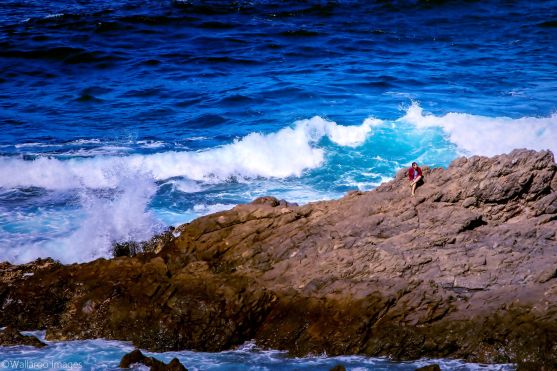 He is the Rock, His work is perfect; for all His ways are justice, a God of truth and without injustice; righteous and upright is He. Deut. 32:4

A night of high drama. A brotherly kiss between friends, but not all is at it seems. Eyes meet in a silent moment of raw, agonising truth. Hearts are laid bare. One man weeps hot bitter tears; another discards all hope. A bag of silver coins is thrown in the dust. A verdict, a sentence and an execution.

The various threads of that fateful night intertwine in a series of familiar stories, any of which we may follow and examine more closely. Eternal destinies were decided that night. Events were set in motion that will never be turned back. Before the coming day was over mercy would triumph over judgment and truth and grace would embrace.

Let’s turn our attention to just two of the lives eternally impacted for better or worse on that Passover night: Peter, a Galilean fisherman and Judas Iscariot, presumably named for Kerioth, the town he hailed from. Both had been chosen by Jesus as members of His inner circle, and both had been named as His apostles (Jn. 6:70; Lk. 6:13).

From the gospel accounts we understand that Peter was somewhat impulsive and, like the other disciples, struggled with personal ambition (Jn. 18:10: Mt. 18:1). A man of extremes, he could be defiant one moment and remorseful the next (Lk. 5:4-8; Jn. 13:8,9)

Satan had already asked for Peter. Jesus made no secret of this fact, warning Peter that He had interceded for him (Lk. 22:31,32). Peter was unable to believe that he was capable of denying Jesus. Until he did. He had been openly resistant to Jesus’ return to Jerusalem with all its obvious danger. He opposed Jesus’ disturbing references to crucifixion and martyrdom. Such possibilities offended him (Mat. 16:21-23).

As his eyes met the probing eyes of Jesus the truth about himself confronted Peter head on. Christ is Truth – not one of us can meet His penetrating gaze and remain in deception. To his horror Peter discovered he was not a leader, he was a coward; he was not a follower, he was a denier; he was not a friend, he was a betrayer; he was not worthy to reign with the Christ, he was unworthy to even be His disciple. There was not one thing he could bring to his own salvation. But with truth came grace, for in Jesus Christ grace and truth converge (Jn. 1:14). A hardened heart was softened and restored and a life in the balance changed forever.

Less is revealed in the gospels about the personality of Judas but we do know he had a weakness for money and was stealing from the common purse shared by the disciples (Jn. 12:6; Mt. 26:14-15). Satan did have access to Judas and even more so when Judas made up his mind to carry through his plan of betrayal ( Lk. 22:3,4 ;Jn. 13:27). Judas’ actions that night were deliberate and calculated. He had pre-arranged to receive thirty pieces of silver in exchange for disclosing Jesus’ whereabouts to the authorities when He was away from the crowds.

Judas also had his heart laid bare that night. He wanted nothing to do with any talk of dying. When it became clear that Jesus had no plan to resist arrest, lead an insurrection and unite Israel in rebellion against Rome, he was offended. He obviously had not signed up for this turn of events.

At the crucial moment of betrayal, however, he too was confronted with the naked truth about himself. ‘Would you betray the Son of Man with a kiss?’ The question must have stung to the core and echoed in his conscience thereafter. Had he really thought Jesus was unaware of his secret? He had been deceived into thinking his thieving had gone unnoticed and so would his plans for self-preservation. But none of us can kiss the face of God and not be confronted with our need for redemption.

Suddenly thirty pieces of silver meant absolutely nothing. The money was thrown in the temple, unwanted. In similar fashion the grace on offer was declined. Silver is the Biblical symbol for redemption while thirty represents fullness or maturity. But there would be no bitter tears, repentance, and forgiveness accepted by this offended heart. Rather than surrender to a grace he could not understand Judas chose to go his own way, ending his life (Acts 1:25).

Two men. One night. Both of them offended by the Cross of Christ. Both of them finding themselves between the Rock and a very hard place. Two extremely different outcomes.

Years later Peter acknowledged the One whose penetrating eyes met his that fateful Passover night as ‘a stone of stumbling and a rock of offence’ (1 Peter 2:8). Each of us at some time will stumble over that Rock so that our need for Him can be revealed. For Peter that revelation was stark. Peter stumbled badly, and broken, threw himself on the mercy of the Rock. Judas stumbled badly, refused to believe Christ could redeem him, and was crushed by the weight of his sin.

Everyone who falls on that stone will be broken to pieces; but on whomever it falls, it will scatter him like dust (Lk. 20:18)

There is a reason Jesus Christ is called the Rock of Offence. It offends the carnal human mind that we need a Saviour. It offends us that the Saviour we need died violently, innocently, and brutally on an execution stake fashioned by human hands. It offends us that His innocent Blood is the only means of our redemption.

We are offended intellectually. The thought of a blood-spattered cross being our only means of salvation is just too humbling, and let’s face it, too unreasonable for proud human minds.

We are offended morally, because we each think we understand justice, but we don’t understand THIS justice.

We are offended emotionally. We don’t want to acknowledge that such a gruesome suffering and death was willingly undertaken purely on our behalf.

We stumble. The offending Cross either brings us to our knees or sends us running in search of a more reasonable god. We find that more reasonable god in Christ-less religion that demands we work for our salvation, or in humanism that assures us we are our own gods and we get to decide what is just and what is unjust.

Righteousness and justice are the foundation of Your throne; mercy and truth go before Your face. (Ps. 89:14)

Righteousness, justice, mercy and truth are chief characteristics of God.

God gave the Law first to teach us about justice and mercy. Without first knowing Law we would not recognise mercy or our need for it. Similarly, without first being introduced to the cold stark truth about ourselves we would not recognise grace, or our need for it. But a tutor is not meant to stay forever (Gal. 3:24,25). After the Law served its purpose, in the fullness of time, came Jesus Christ, the personification of grace and truth together.

Only in Christ do mercy, truth, justice and righteousness merge. At the Cross mercy triumphed over judgment and God made just all who believe on Christ (Jas. 23:13; Acts 13:39).

A rock can be a place of safety and refuge, or it can be an agent of disaster. Peter yielded to the Rock and found grace. Judas chose his own way and found law. Law says a life for a life. Grace says His death for my life.

The greatest Offender to the fallen carnal nature of every person is Jesus Christ; the greatest offence humanity has ever experienced is the Cross of Christ.

For those of us who follow Him, falling on the Rock is not a single event, it’s a daily choice. The hard places we find all around us loom darkly, threatening to overwhelm and destroy. But we bear witness that there is a Rock of Offence who is our hope, our healing and our ever present salvation. This good news is the gift we offer to a stumbling world.

© Cheryl McGrath, Bread for the Bride, 2016. Copyright Notice: Permission is granted to freely reproduce any Bread for the Bride articles in emails or internet blogs, unaltered, and providing this copyright notice is included.     To permanently display an article on any static website please contact me for permission.